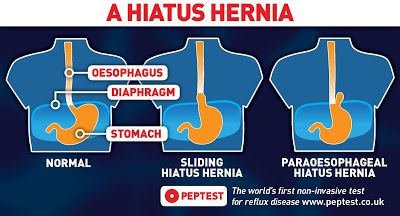 What is a hiatus hernia?

Your oesophagus connects to your stomach by passing through a gap in your diaphragm called the hiatus. A hiatus (or hiatal) hernia is when part of the upper stomach slides upwards into the chest by squeezing through the natural opening in the diaphragm muscle where the oesophagus (the tube that carries food to the stomach) passes. This is commonly called a sliding hiatus hernia.

A para-oesophageal hernia is when the oesophagus and stomach stay in their normal positions, but part of the stomach squeezes through the hiatus, to move alongside the oesophagus.

What causes a hiatus hernia?

A hiatus hernia may be the result of the diaphragm becoming weak with age, through injury or from pressure on the abdomen by coughing, vomiting or straining during a bowel movement, or lifting heavy objects. Hiatus hernia is also possible in babies born with defects in their diaphragm. 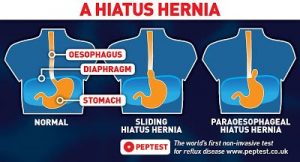 Hiatus hernias are very common; according to the NHS, a third of people over the age of 50 have one. It usually does not cause symptoms unless it is very large, however, long-term damage to the oesophagus due to leaking stomach contents can lead to ulcers and changes to the cells of the oesophagus – increasing the risk of oesophageal cancer.

How is hiatus hernia diagnosed?

Hiatus hernia can usually be diagnosed by an endoscopy – where a thin, flexible camera is passed down the oesophagus and into the stomach – or a Barium meal X-ray.

How can a hernia cause reflux?

Gastro-oesophageal reflux disease, where stomach juices leak into the oesophagus, can occur if the valve at the bottom of the oesophagus – known as the lower oesophageal sphincter (LOS) – stops working properly.

Some medical researchers believe a hiatus hernia can prevent the LOS from doing its job efficiently, causing reflux. The oesophagus then becomes irritated, leading to symptoms, such as heartburn, chest pain and dysphagia (problems swallowing).

The hiatus hernia is also implicated as a common cause of laryngopharyngeal reflux (LPR) when stomach contents pass through the oesophagus, through the upper oesophageal sphincter (OES), and into the back of the throat, and may even reach the nasal cavity.

Other hiatus hernia symptoms include:

What hiatus hernia treatment is there?

Many people with a hiatus hernia don’t experience any signs or symptoms and are not considered for treatment – although anyone at risk of complication may be offered surgery.

There are a number of ways people tackle their reflux symptoms, including lifestyle modifications and dietary changes.