An evaluation of the current literature on pepsin 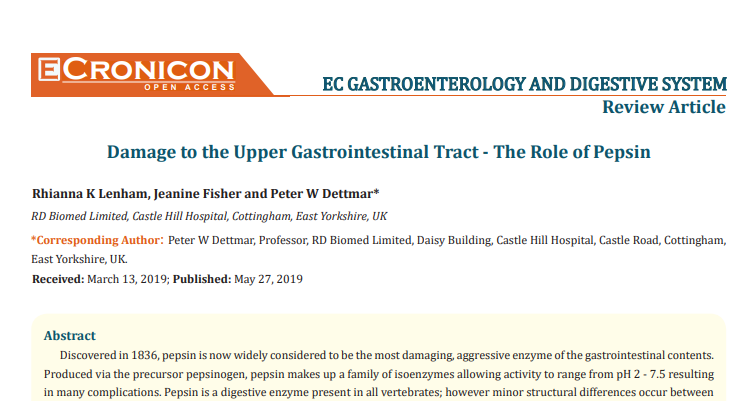 An evaluation of the current literature on pepsin from its discovery and structure to the comparison of concentration between adults and newborns has recently been published in the internationally peer reviewed journal EC Gastroenterology and Digestive System (ECGDS).

The review – Damage to the Upper Gastrointestinal Tract – The Role of Pepsin by Professor Peter Dettmar and his colleagues at Castle Hill Hospital, Rhianna K Lenham and Jeanine Fisher – covers all roles of pepsin and the damage it can cause to the upper gastrointestinal tract.

Pepsin is widely considered to be the most damaging, aggressive enzyme of the gastrointestinal contents.

Salivary pepsin has been demonstrated to cause harm to cells via endocytosis, weakening protective proteins and damaging golgi apparatus and mitochondria.

The aim of the paper is to link the damaging effects of pepsin on the gastrointestinal tract and how these effects lead to reflux disease.

Peptest has made pepsin detection in clinical samples far easier and this is reflected in the number of gastrointestinal and respiratory diseases now identified as strongly associated with the enzyme.